Last night I reblogged a post about global food supply. I think we should be aware that this sort of thing is going on globally. Some people do profit from shortages. It has always been like this as far as I know.  I think for people like me to be able to cope with the worries about the poor people in this world it helps to turn to meditation and a belief in God. Do I help the poor people with this? I am under no illusion that this certainly won’t feed the people who desperately need help. However if I go mad this doesn’t help them either. If you ask me, I’d like to see a world where people would not have to starve because of the greed of others. How to change the minds of greedy people? Well, I wished I knew the answer to this! 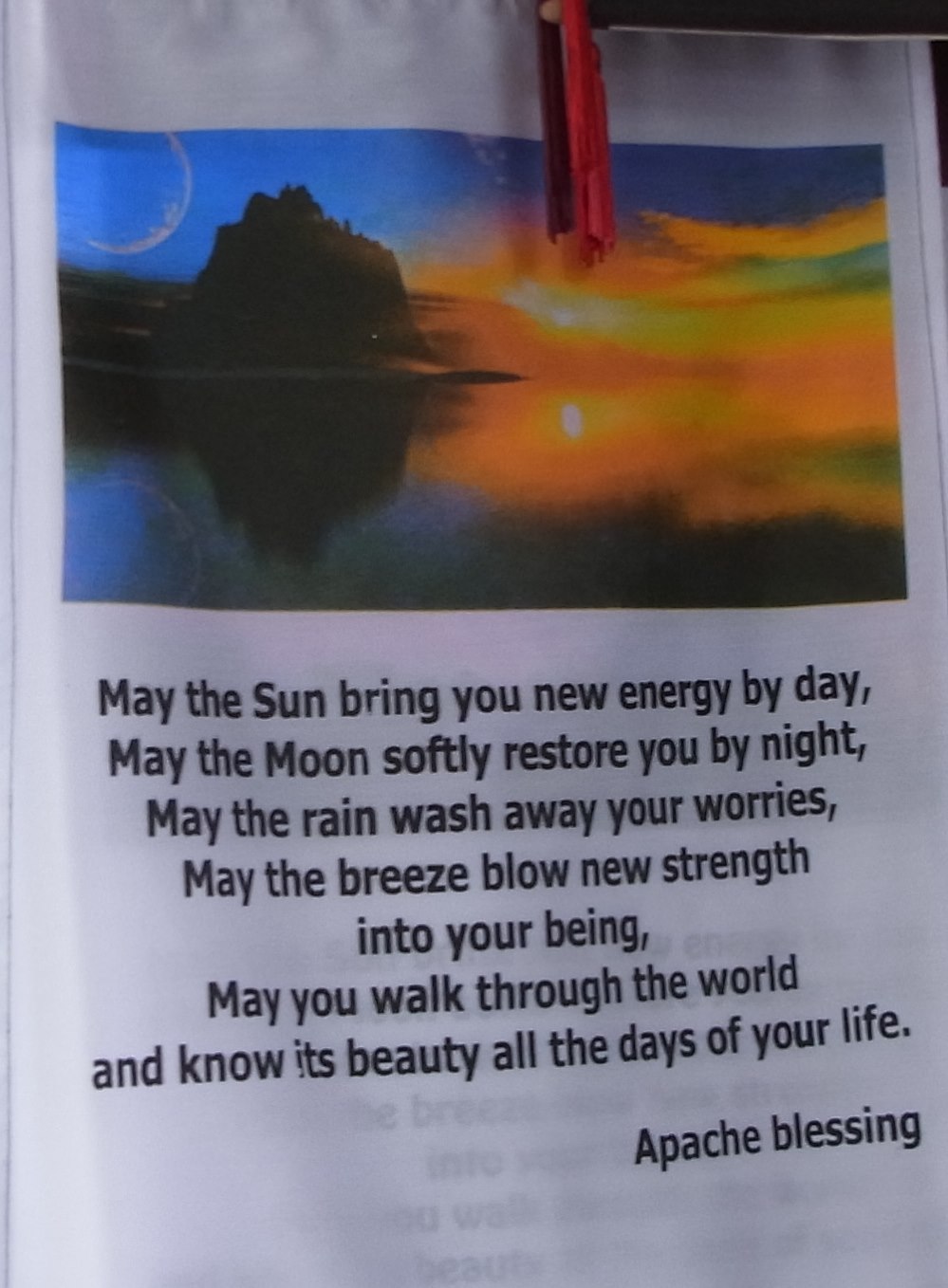 I saw this poster hanging in one of the shops in Berry yesterday.
It calms me to read something like this.

11 thoughts on “Sunday, 1st of June 2014”
gerard oosterman
June 1, 2014 at 10:41 am Edit
You are doing as much as is possible Aunty. I am sure the world would be a better place if more were like you.
Did you watch Utopia last night? The John Pilgers of this world do a lot of good too by drawing attention to injustices. They are experts at communicating the ills of this world and draw attention that might help towards change.

Reply
auntyuta
June 1, 2014 at 2:34 pm Edit
Hi Gerard, the short trailer you provided says a lot about conditions in Utopia. I am sure there are a few more distressed people in this world the way I am distressed about certain conditions. – – – Yea, I know, we have to accept the things we cannot change – – – So Is it God’s will that our Aboriginal people in Utopia do live the way they do?
You are right, someone like John Pilger draws attention to injustices. Some injustices are gradually being rectified, but what about Utopia? Human rights for every one on this earth, maybe this is just a dream, but a very good one. 🙂

Reply
berlioz1935
June 1, 2014 at 11:05 am Edit
This behaviour is called “cornering the market”. They think it is smart. I think it is disgusting and stealing because people have to pay with their work for the higher prices.

John Steinbeck, in “East of Eden” describes that someone bought beans in anticipation of the war.

Reply
The Emu
June 1, 2014 at 3:06 pm Edit
In todays technology and mankinds knowledge, there should be no food shortages anywhere throughout the world, unfortunately greed in marketing is the main reason, shortages put prices up, global marketing has a lot to answer for.
I saw Utopia and have seen these situations firsthand, the following is my response to John Pilger.
Thank you for a great documentary on a national disgrace.
The treatment of the Aboriginal peoples since first European settlement, must be the biggest crime ever committed by White Australians.
It is now not only a crime nor an atrocity, but must be considered a Holocaust.
A Holocaust that is sytematically being perpetrated by various Governments when holding power.
It is also a Holocaust that the Government is condoning, by allowing the select few, the Gina Rhineharts, the Clive Palmers et ilk, to exploit the Aboriginal lands with endorsement of the big mining companys.
An exploitation based on financial returns that in actual fact, are minimal in return to not only the white economy but the Aboriginal peoples.
It was refresshing to see you report through an Aboriginals eyes with an Aboriginals heart.
There are many questions still unanswered.
Mal Brough, Warren Snowdon and Greg Andrews are just some of those Politicians and Public servants who are puppets of every Government party that comes to power.
Ian Felton

Reply
auntyuta
June 1, 2014 at 3:45 pm Edit
Yes, Ian, there should be no food shortages!
Thanks for your response to John Pilger, Ian. Thank you very much for inserting it here. I read it with great interest.
Sincerely
Aunty Uta

Reply
Marylin Warner
June 1, 2014 at 4:06 pm Edit
Even Biblical stories are filled with greedy kings and rulers who let grains spoil rather than feed the poor. Precedence is current reality, and even when countries contribute food to starving people, there are often officials or individuals who intercept it and use it for profit.
It shouldn’t happen, but it does, and it seems every solution has loopholes and additional problems.

Reply
auntyuta
June 1, 2014 at 7:02 pm Edit
It’s a tragedy that with all our present knowledge and great advances in technology we still often display feelings more fitting for the middle ages! What could help? Perhaps more education in humanitarian subjects? Religious teaching seems to me quite often not to be tolerant enough or leaning towards fundamentalism. “Love thy neighbour” still sounds to me like very good advice. But it really should apply to all our neighbours, which is really every one on this earth. Where people are being taught to help each other they usually achieve marvellous things.
I believe in the goodness of people. When they behave in a bad way, they show that they have problems. Perhaps feeling insecure and unloved? Anyhow, thank you very much for your comment, Marylin. I do appreciate it! 🙂

auntyuta
June 2, 2014 at 10:59 am Edit
Thank you so much for your response, Robert. I think you have some great ideas. People like you can bring about some change. I admire people who do their best in giving as many people as possible a good, well rounded education.
Going back in history, I believe for instance Wilhelm von Humboldt did a lot in his time to develop a broad range of university studies.

I just looked up this bit in Wikipedia: