Meike rated it liked it
Shelves: germany, 2019-read
In 1899, Robert Koldewey and his team started their archaeological mission to find the remains of Babylon, one of the most influential cities in human history, and what they dug up changed people’s understanding of ancient history and the Bible (they actually found the Tower of Babel) – oh yes, and on top of that, Koldewey, an architect, revolutionized archaelogical research when it comes to the reconstruction of building structures. So is this the story of a cultural hero? If you want to see the artefacts Koldewey found, especially the overwhelmingly beautiful Ishtar Gate which was constructed by order of Nebuchadnezzar II, you can certainly do so – in the Pergamon Museum, Berlin. 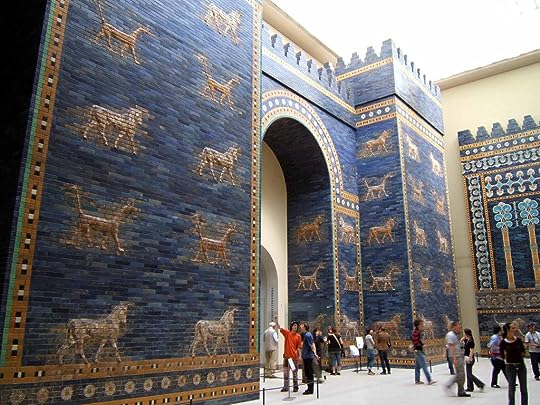 I’ve been there, and yes, it is fantastic, but this is stolen art. Up until World War I, European powers were caught in an archaelogical race to plunder historic sights in Asia, stealing artefacts that hold immeasurable value for humanity. The discussion about stolen art is slowly starting to get real attention all over Europe, and particularly major colonial powers like Britain have to confront questions of restitution when it comes to their massive collections of stolen colonial art.

Kenah Cusanit, who studied ancient Near Eastern languages, wrote a debut novel that paints a vivid picture of Koldewey’s expedition, the atmosphere at the site, the political rivalries, the expectations in Europe where the war was approaching, and the attitude of the West towards Eastern cultures during the early 20th century – this is a twisted adventure novel with historical and cultural commentary. Often, the text is very funny when it highlights the absurdity of the German bureaucracy trying to orchestrate an expedition in what is now Iraq that requires a lot of diplomacy on site and that attempts to find, order, catalogue and pack up a part of human history. Accordingly, Koldewey, our main character, spends most of the day we accompany him lying down with what he suspects to be appendicitis while Berlin is desperately trying to make him write a final time table for his endeavors.

Some papers have complained about Cusanit’s rich and elaborate language and found it slightly pretentious, but I have to contradict: Just like the Euphrates that is described right at the beginning of the novel, the language flows slowly under a thick narrative heat, swirling up clay and measuring Mesopotamia – it’s very fitting. Generally, the book offers a brilliant concept and it is very timely, but the idea is slightly better than its execution. Sometimes, the story is not dense enough, which is particularly challenging because it contains (and has to contain, in oder to be fully understood) so much information.

Still, this book is clearly recommended, and I hope the foreign rights will sell quickly, because this is a conversation to be had all over Europe.